A signing ceremony took place on Tuesday, April 25th at 9 am in the Museum Room of City Honors School for three of four seniors who will be playing NCAA-level athletics in college next year. 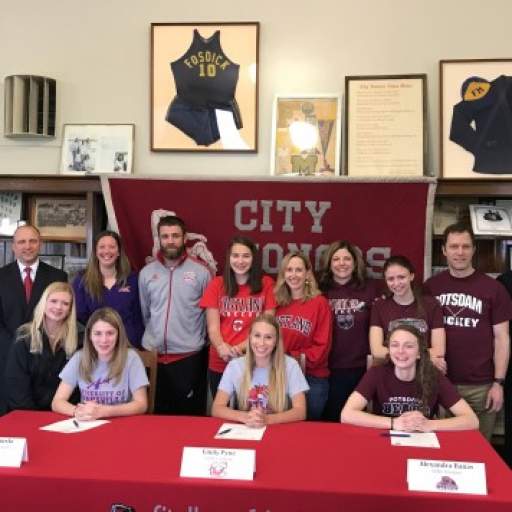 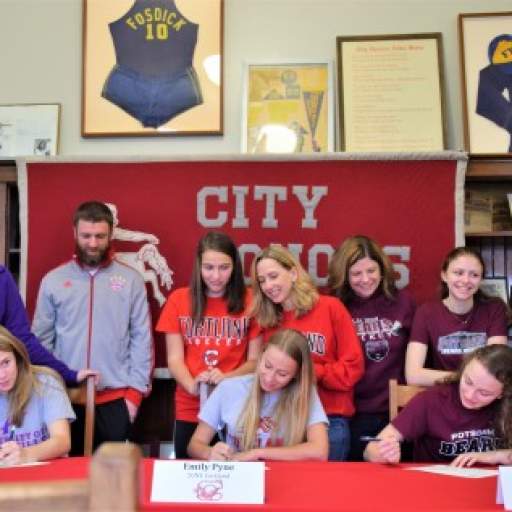 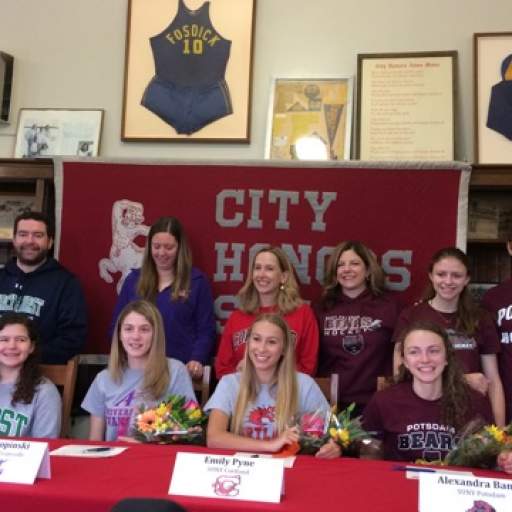 Jenna Szopinski has committed to playing Division 1 Soccer at the University of Evansville, Indiana, where she plans to double major in criminology and sociology. Szopinski has been playing soccer since she was four-years-old. She started at City Honors as a 7th grader, joining the varsity soccer team that year, and is currently finishing her second year as a Diploma Candidate in the International Baccalaureate Diploma Program. Szopinski has been a leader in points in the Section VI division, racking up 334 points during her six years on varsity. She is currently ranked number 13 in New York State in points, and number 133 in the United States. She also holds the #1 spot for assists throughout all of New York for the 2012, 2014, and 2016 seasons and is currently ranked #1 for career assists in New York State. Szopinski has received numerous player of the week awards, including the National Soccer Coaches Association of America and Maxpreps State Player of the Week during the 2016 season.

Emily Pyne, Szopinski’s teammate, has been recruited to play Division 3 Soccer at SUNY Cortland next year and plans to major in Conservation Biology. Pyne has attended City Honors since 5th grade and is also an International Baccalaureate Diploma Program Candidate. Pyne also began her soccer career at age four and has been on the City Honors varsity soccer team since 7th grade.  In 2016, she received Honorable Mention for the Section 6 Scholar Athlete Award.

In addition to being teammates on the City Honors varsity soccer team, where they were captains of the team in 2016, Szopinski and Pyne played together with the Delaware Soccer Club and four years ago went on to play premier level soccer with GPS-NY. Pyne served as captain of her GPS team the last two seasons.

Alexandra “Allie” Banas will be playing Division 3 Women’s Ice Hockey at SUNY Potsdam next fall. Banas was offered, and accepted, placement in Potsdam’s Honors Program. This program only offers admission to applicants in the top 5% of each admission class. She will be majoring in Exercise Science/Physical Therapy. Like Pyne and Szopinski, Banas is also an International Baccalaureate Diploma Program Candidate. She has been playing hockey since age five for the Buffalo Bisons organization and has played for City Honors Club teams since 6th grade. She has been a member of two Girls Tier 1 New York State Championship teams that went on to compete at the USA Hockey Nationals in Boston in 2012 and Minneapolis in 2016. Banas has played for the City Honors Varsity Club Hockey team, a member of the WNY High School Club Hockey League (WNYHSCHL), since 10th grade. Banas was the only girl in the traditionally male league this season and was the only member of her team to be named as a WNYHSCHL First Team All Star for the 2016-2017 season - becoming the first female skater to receive this honor from the league.

A signing ceremony was held in the fall for varsity softball standout, Jenna Balducci. Balducci, a 2016 All WNY Small Schools team member and recipient of six tournament MVP awards committed to playing Division 2 softball at Mercyhurst University in Erie, PA.

The generosity of alumni, parents, and friends significantly enhances the quality of education at City Honors School